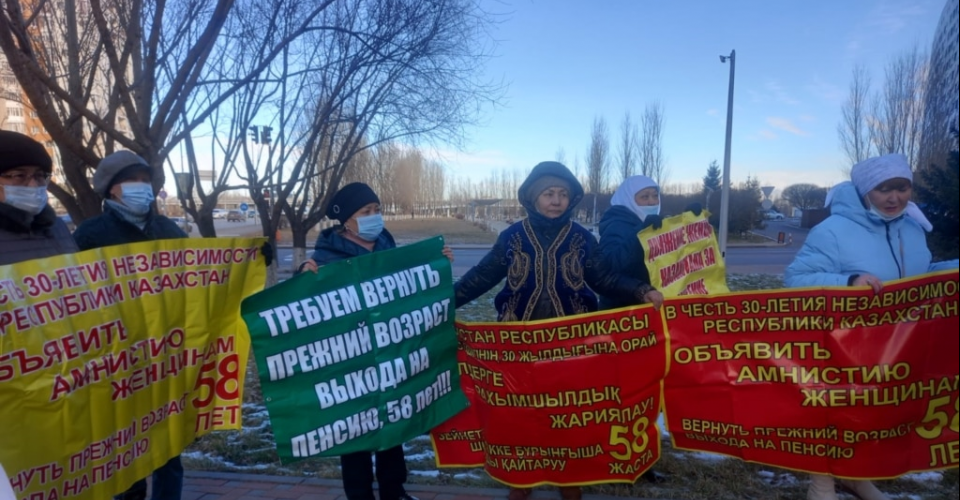 On November 7, a group of women held a rally in front of the Ministry of Labor in Nur-Sultan demanding to reduce the retirement age, the national portal "Adyrna" reports citing a source.

They called for an amnesty for women on the occasion of the 30th anniversary of the independence of the Republic of Kazakhstan! Let women retire at the age of 58! He held placards with the words:

The shares of the protesters were monitored by special troops and police sitting on two buses. A representative of the Esil district akimat repeatedly warned that the action was illegal.

- According to the law, we warned the executive committee. We left without permission, because we announced on social media that there would be a rally. More than fifty people came. "The police seem to be very worried about us gathering on Sunday," he said.

Six people took part in the action and dispersed in less than an hour.

The group, which protested against the increase in the retirement age for women, held similar posters on October 1. This time, a representative of the Ministry of Labor suggested setting up a special working group to discuss women's demands.

Maiken Bekarystanova, one of the organizers of the women's movement, which has called for a lower retirement age, says last month's promise was kept.

- We met with the First Deputy Minister Akmadi Sarbasov on the ZOOM platform. But he didn't give us a word and left. A working group has not been set up. We sent a letter to the Parliament, to former President Nursultan Nazarbayev, to the "People's Party of Kazakhstan". We only received a response from the Ministry of Labor that the retirement age will not be reduced. We will not stop fighting, - says Maiken Bekarystanova.