A forum "Society supports law and order" was held in Aktobe 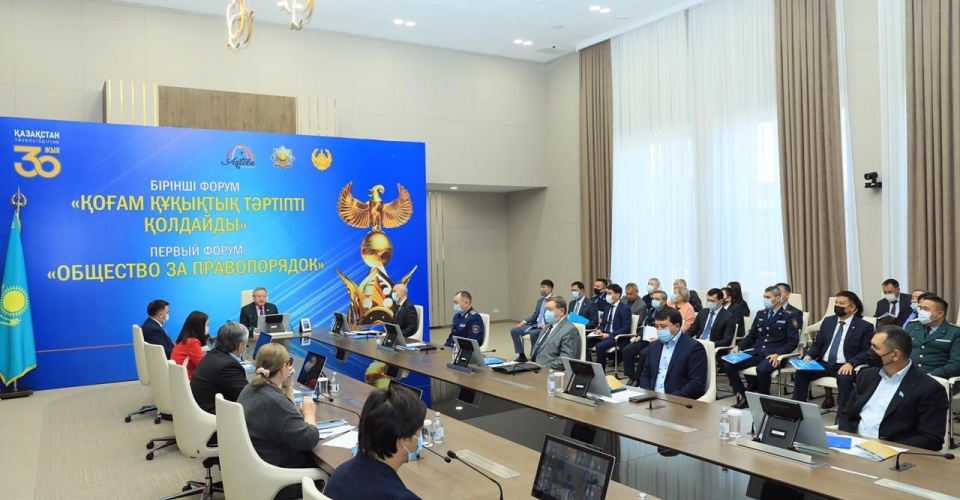 On October 27, Aktobe hosted a forum entitled "Society supports law and order." The forum concluded and became a platform for dialogue with the public to discuss further plans for the protection of law and order and the formation of "zero tolerance" for crime in society.

The forum was organized by the executive committee of Aktobe region and the regional prosecutor's office.
The head of the region Ondasyn Orazalin, heads of law enforcement agencies, maslikhat secretaries, members of the interdepartmental commission on crime prevention, representatives of the regional Public Council, heads of universities, organizations and enterprises of the region took part in it. Delegates from the regions took part in the forum online.

In 2019, a unique project was launched in Aktobe region, which has no analogues in the country, involving the public in crime prevention. The project is implemented in the form of an interagency plan. It provides for the interaction of government agencies with the public, the formation of people's groups, the development of a network of youth volunteer movements, the involvement of public associations, universities and labor collectives in joint work to ensure law and order.

Landscaping of public spaces and lighting of settlements are also important in crime prevention.

“As you may have noticed, lately I pay special attention to the improvement, lighting and repair of many yards in our city. In particular, the yards of houses near the railway station have been without electricity and care for many years and have become hotbeds of crime. As a result of systematic work since the beginning of the year, a number of yards in the area were landscaped, streets were repaired, playgrounds and streetlights were installed. This is very useful in preventing various crimes in the area. In general, the security of our city, the indifference of the population to crime, the cleanliness of the environment are common. I hope that today's forum is the beginning of joint work and will continue in the future, "he said.

Involvement of civil society institutions in the project is carried out in three main areas: patrolling urban areas, prevention of domestic violence and criminological analysis of crime in the regions.
According to the prosecutor's office, the project has yielded positive results.
"This year, there is a decrease in crime in public places and disadvantaged families covered by the project. Implementation of the recommendations of the criminological analysis of Martok district also significantly reduced all types of crime in the area, "said the regional prosecutor Marat Kaibzhanov.

It's worth noting that criminological analysis is currently being conducted in other districts of the region.

It was noted at the forum that active social workers and their leaders were awarded, and employees of the Aktobe Chromium Additives Plant are actively involved in patrolling one of the districts of the city. To date, enterprises have signed a total of 15 memorandums on the distribution of employees to maintain public order. There are plans to involve another 80 companies in the project. About 80 more companies are expected to join the project in the near future.